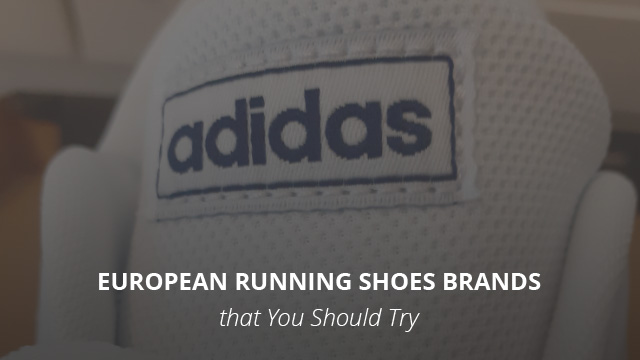 Running shoes must have some specific features, such as the presence of resistant materials, capable of making them last for a good amount of time.

They should also have a structure that is able to support the movement of the foot, as well as some water resistance, and at the same time a good level of breathability.

The European brands that sell running shoes are many, and today we have selected eight which in our opinion are some of the best.

They offer products for both those looking for casual running shoes and those who run at a competitive level.

Hoka One One is a brand that produces sneakers and running shoes. The latter became very famous when the company decided to produce products with an extra cushion, perfect for giving the needed boost when running.

The company also deals with numerous details and for this reason, its shoes are considered by customers to be very particular and attentive to every little aspect.

As for the origins of Hoka One One, the company was founded in 2009 and its first headquarters was in France, Annecy to be precise. Today, however, its headquarters are in Goleta, California. The producers of the brand have always had a particular philosophy, which is based on the desire to make a radical change.

Initially, the main purpose was to make a shoe that would help the runner increase his speed. Over time, however, the company’s attention has also shifted to the desire to increase the level of comfort and practicality of those who wear its products.

Their products are dedicated not only to real athletes but also to beginners and those who do not practice running at a competitive level.

A model that best represents the characteristics of Hoke One One is the Mach 4, having a particular design with a tapered shape for speed while running, and bright colors.

HOKA Product Feature: Mach 2
This video will be loaded from YouTube.com, a third party. If you click "Play", you accept their terms of service, and their use of cookies.

Salomon is a very famous company for the production of sportswear but also sports accessories and for the creation of perfect shoes for every type of sport. Very famous are the racing ones, which are produced of every type, shape, and structure, to try to satisfy every customer and every taste.

As for the origins of this brand, the year of foundation dates back to 1947 in France, and one of its fundamental characteristics is that over the years the producers have come up with an increasing number of technologies and innovative solutions, to keep up with the times and to always be able to amaze their customers.

In fact, today one of Salomon’s main objectives is to be able to offer special equipment, which can also guarantee maximum comfort and excellent sports performance, to those who wear it.

PREDICT 2 | Salomon Running
This video will be loaded from YouTube.com, a third party. If you click "Play", you accept their terms of service, and their use of cookies.

An example of a shoe that represents the various characteristics of the Salomon company very well is the Predict 2, which has a good sole, is durable, and has a slightly raised tip, in order to create a perfect condition for good traction.

In addition to this, the structure of this shoe is perfect to guarantee the wearer a good level of practicality, but also an elegant and colorful appearance.

Read also: What To Look For in Running Shoes for Wide Feet? (5 Things)

Fila is a company of Italian origins and today is very famous for the production of sportswear, but also casual clothing, and footwear.

Its origins date back to the year 1911 when the brand was founded in Biella, Piedmont. Its founders were the Fila brothers, who then gave the company their name. In the early years, the brand was involved in producing only underwear, both for men and for women, and in the following years also for children.

Today the company is also famous for the production of running shoes. A model that belongs to this category is the Fila FRT Engineered Air Mesh Wmn, which is a shoe for both running and training and has a very particular structure, because it is perfect not only for good traction and great speed but also for good grip, so as to avoid slipping.

As you can see from this model, the company is also very attentive to details relating to design and colors and does not fail to create very special products, which can satisfy even the most original tastes of customers.

Don’t miss: Is It Worth It Buying a Waterproof Running Jacket?

On is a Swiss company and its philosophy is based above all on the desire to make the wearer perform a very soft landing, which at the same time is able to ensure a perfect movement. Precisely for this reason, a phrase that best represents On’s principle is “running on the clouds”.

As for the foundation of the brand, it all started with Olivier Bernhard, world champion of duathlon, who wanted to find a truly revolutionary shoe, which would allow him to run faster without making his feet tired. In addition to him, other founders are also his friends David Allemann and Caspar Coppetti.

Bernhard then decided to retire from competitions and dedicated himself to the production of shoes, until in 2010 he officially founded his company in Zurich. One of the most particular features of the company is the CloudTec® technology, which allows for a great cushioning of the shoes.

On Cloudventure | Born in the Swiss Alps
This video will be loaded from YouTube.com, a third party. If you click "Play", you accept their terms of service, and their use of cookies.

The purpose of this innovative solution is to prevent the muscles from becoming heavier during the race and in addition to avoiding them from getting tired.

An example that perfectly illustrates the attention that the brand has for new technologies and various details is the model Cloud, available in different colors, so you can also combine it with different types of looks.

La Sportiva is an Italian brand that among other products, also deals with the production of trail and mountain running shoes. Its foundation dates back to 1928 when at that time it was only a small artisan workshop.

Today it has become a very important brand with an international reputation, which creates products dedicated to sportswear and in particular to mountaineering.

La Sportiva Mountain Running - web series Episode 3
This video will be loaded from YouTube.com, a third party. If you click "Play", you accept their terms of service, and their use of cookies.

A famous example of La Sportiva running shoes is the model Jackal, very particular because it features a particular technology called Infinitoo™ that guarantees a good resistance, even for very prolonged workouts and runs.

It’s based on a cushioning system that not only allows the feet not to feel the fatigue of running but also guarantees them breathability, comfort, practicality, and an extra boost to increase speed.

In addition to this, the shoe has very particular colors, which make it perfect to combine with any sportswear item, whether colored or neutral.

Puma is a well-known German brand for the production of sportswear and in particular also for the production of running shoes. The company was founded in 1948 and in all these years it has always tried to find solutions that amaze the various customers, trying to satisfy not only their tastes but also their sporting performance.

In fact, today the brand produces clothing and accessories for every type of sport, so much so that it has become famous worldwide and throughout its history, several famous athletes have had the opportunity to wear products of this brand.

An example of running shoes made by Puma is the model Porsche Design Xetic Shift, which has a very breathable system, so as to prevent the feet from accumulating sweat and from becoming tired after short workouts.

In addition to this, the sole is specially structured to guarantee a stable and safe support system on the ground and also to be able to give a useful boost for the next step.

Read next: 8 German Boot Brands for Hiking and Outdoor Activities

Salewa is a well-known Italian brand for the production of trail running and speed hiking gear and its origins date back to 1935, the year in which Josef Liebhart created a company that dealt with the production of bags and backpacks, and other leather products.

In fact, for several decades the brand was known for these product lines, and only later did the company also become famous for sports shoes.

The SALEWA Speed Hiking Concept
This video will be loaded from YouTube.com, a third party. If you click "Play", you accept their terms of service, and their use of cookies.

An example of the trail running shoes of the Salewa brand is the Ultra Train 3, which is extremely light and therefore also suitable for training and long runs. This model also best represents the attention that the company has in making shoes that can be used in different weather conditions.

The shoes are breathable and can be used when it rains, since the outsole guarantees a solid and stable grip on the ground, preventing slipping.

Don’t miss: Salewa vs Salomon Hiking Boots and Shoes: Which Brand is Better?

Adidas is a German brand, very popular for the production of sportswear and among its various product lines, one very well known is that of running shoes.

The brand’s origins date back to 1924 when Adolf Dassler decided to produce soccer shoes. Over the years, the brand became more and more famous, until it was known internationally.

Adidas logo on a shoe

A model of Adidas running shoes that we can mention is the Ultraboost 21, which has a rounded shape and a perfect boost for faster runs, to reduce the feeling of excessive fatigue on the feet.

Must read: Adidas vs Nike Running Shoes: Which Brand to Choose?