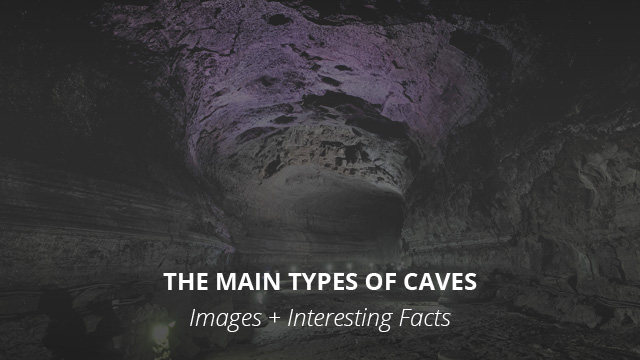 We all know what caves are and that they are pretty much everywhere around the world, but do you know how many there are, how they form, and where you can find them?

We didn’t either, which is why we took time to write an article finding the information on just that.

Continue reading to learn everything there is to know about the seven main types of caves and where you can go to visit the most beautiful ones.

1. How Many Different Types of Caves Are There?

There are millions of caves in the world, created by humans, animals, and the elements. However, to be a true cave, it has to meet some specific guidelines. Real caves are made naturally, from wind, rain, waves, etc. But must form through a natural situation.

For an area to be considered a cave, it must also have enough space for someone or something to fit inside it to keep them protected from the elements outside of the area.

2. How Are Different Types of Caves Formed?

There are a few different ways caves are formed, like by lava tubes, tectonic rock movement, or crashing waves, the most common and frequent cause is chemical weathering and dissolving from natural acid found in rainwater and groundwater.

Although caves can technically be formed through water on their own, such as crashing waves or frequent rainfall, this only creates tiny carvings and will take a significant amount of time to cut out an entire cave in this manner.

The natural acid that is the primary cause of cave formation comes in the forms of carbonic acid and sulfuric acid. When these acids mix with rainwater, they can seep into cracks and crevasses of the earth, dissolving rocks and widening crevices into larger spaces.

How Do Caves Form?
This video will be loaded from YouTube.com, a third party. If you click "Play", you accept their terms of service, and their use of cookies.

Erosion is one of the next biggest ways caves form, and it happens for example when wind speeds become excessive and blow through sediments and rocks. It can also happen when the weather changes and land formation starts to change.

A good example is ice melting, creating large openings, or ocean waves crashing into the coastlines digging into the sand and soil, opening tunnels.

You will even find man-made caves all around, designed for multiple reasons with the biggest one being mining.

For many years, people have blasted holes and dug their way through the rock and soil to mine for minerals, such as coal and diamonds. These caves can go for miles and are usually supported with beams and rails.

Although they are meant to be temporary caves made solely for mining, tons of them are still standing today. They may not be safe to enter but are still there because they have yet to collapse.

3. What Is the Difference Between a Cave and a Cavern?

Many people think caves and caverns are the same and refer to one as the other often. However, this isn’t technically true. Caverns are a type of cave, but not all caves are caverns.

A cavern is unique because they grow things called speleothems. A speleothem is a formation created inside a cave from mineral build-up leftover by water. The most common forms of speleothems are stalactite or stalagmite.

These formations will grow over time, creating unique and interesting-looking objects. The formations differ in appearance and size, depending on the location and the minerals deposited at the site.

Stalactites and Stalagmites
This video will be loaded from YouTube.com, a third party. If you click "Play", you accept their terms of service, and their use of cookies.

4. What is the Most Common Type of Cave?

Solution caves are the most common form of a cave located around the world because most rocks that caves are created from are easily dissolved by natural acid found in natural rain and groundwater.

These rocks are limestone, marble, dolomite, gypsum, and halite, with limestone being the most common form.

These solution caves are made from large limestone formations found near karst landscapes. These are locations where the bedrock of a location is starting to erode due to things like underground drainage systems, sinkholes, and more.

5. What Are Rock Shelter Caves?

A rock shelter, also known as a rock house or bluff shelter, is a small carving on the side of a mountain or bluff that doesn’t extend too deep into the earth like caves that can go for miles.

Rock shelters are usually formed when larger, stronger, erosion-resistant rocks like sandstone are atop weaker rocks and stones. These weaker rocks erode by natural elements, leaving the sandstone in place with a hollowed-out space left underneath.

These rock shelters are usually formed by wind erosion and frost. When water gets into the tiny cracks between the stones and pebbles it freezes, pushing these particles apart and loosening them away from the formation.

There are seven main types of caves found around the world today. They are all formed by natural processes, including weather erosion, volcanic eruption, strong winds, and more. Many of these caves can go by a few different names; however, the explanation will guide you in determining which cave is which. 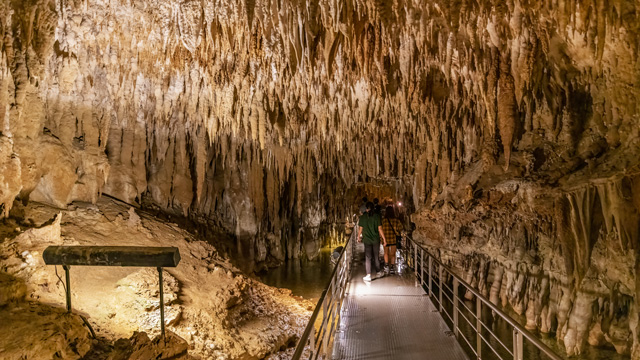 Solution caves are the most common forms of caves located in many different areas around the world. These caves are created when groundwater or rainwater becomes diluted with natural acids and runs through the cracks and faults of joins in the rock, dissolving it.

It isn’t just limestone that can be affected by these acidic waters, you will also find solution caves made from marble, dolomite, gypsum, and halite.

Once a cave formation begins and the opening widens, water seeps down the walls, dissolving the rock and causing the cave to get bigger and bigger. 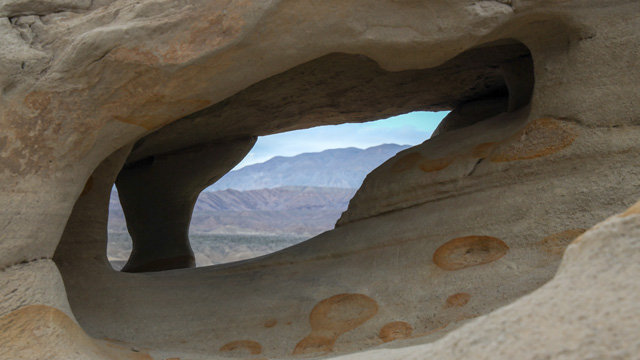 Eolian caves are usually found in desert areas and are created when the wind blows wear away at sandstone cliffs. These caves almost always form in the shape of a bottle, with a wide opening that gets narrower toward the back of the cave.

Eolian caves are usually never longer than a dozen meters or so in length. 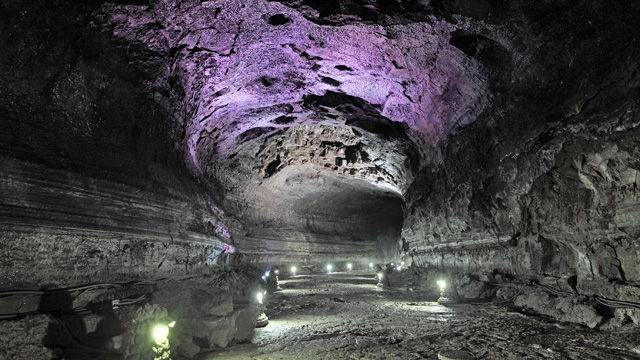 Lava caves are caves and craters formed in volcanic rock. These caves form at the end stages of a volcanic eruption after the outer layer of lava has frozen or solidified, but the lava inside is still in liquid form and continues to flow, creating a hollowing for miles until the eruption has ended, and all the lava has solidified. (source) 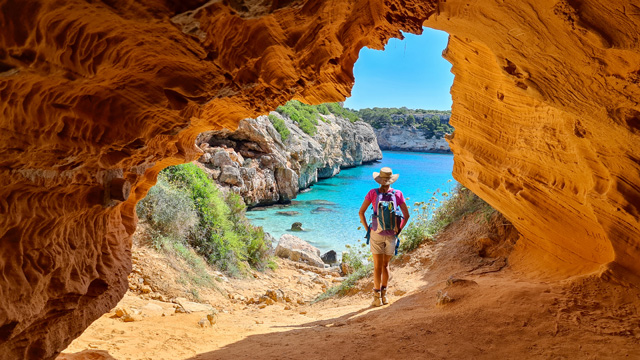 Sand caves are also formed by wind, blowing and moving sand, destroying and carving grooves to form a large opening. 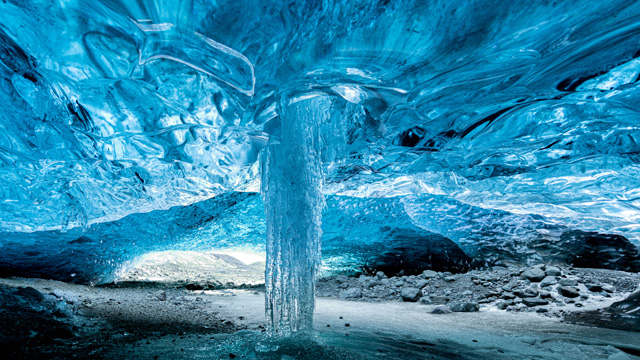 Ice caves normally form when the temperature warms up or the sun hits glaciers, causing them to melt, and that meltwater runs down through the hunk of ice, leaving a large open in its path.

Another way an ice cave can form is by warm water flowing under a glacier, causing the ice to melt and creating a cave as it moves.

Ice cave shapes and formations can change over time as the ice heats up and cools down over and over. There are even some ice caves with crystal-like formations scattered about the tops of the caves, caused by ice cycles and thin sheets of ice that allow light to shine through, creating a spectacular scene. (source) 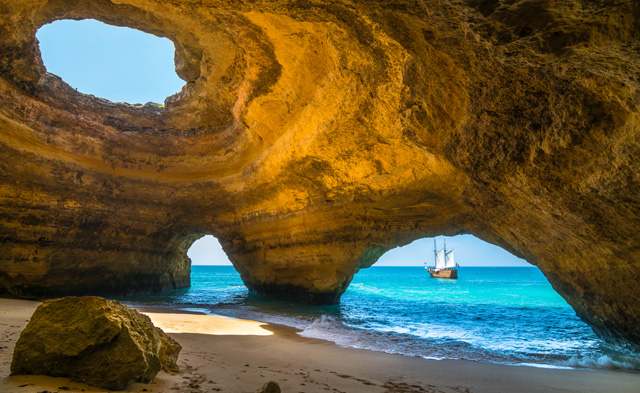 A sea cave is created by the wave action of the water slamming against the cliff above the sea. This type of movement causes the cliff to erode, creating a large opening in the weakest spots along coastlines. This, along with hydraulic pressure, will help expand the cave making it wider and deeper. (source) 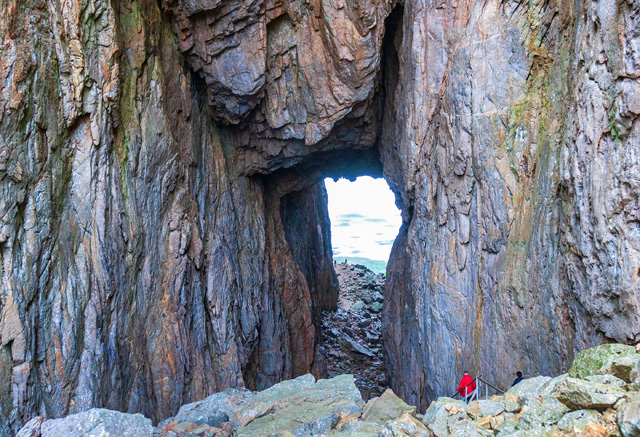 Talus caves are one of the smallest types of caves and are seen less frequently. These caves form when boulders and rocks pile on top of a mountain slope, forming a small opening. Not many of these caves are big enough for any real exploration, but there are a few that can lead you quite a ways.

Each cave is different and has unique features and properties that make them all extremely interesting and fun to visit. (source)

7. Amazing Caves Around the World

Nothing is more beautiful than the work of mother nature, and that includes the beautiful scenery available in the form of cave formations. Many caves are not secure or safe to walk through due to the risk of collapse, but many around the world are worth a visit.

Here is a list of the 10 top caves people from all over the planet travel to get a peek at the most amazing formations created by the elements.

Mammoth Cave is the world’s largest cave system and can take up to six hours to walkthrough if you are taking your time. Some areas are lit up by electricity, while other spots require flashlights and lanterns to travel through.

After descending 750 feet, you can walk a one-mile trail through the Carlsbad caves. Bring headlamps and flashlights while enjoying a guided tour through this amazing location.

The Eisriesenwelt Cave is the largest ice cave in the world and one of Salzburg’s most popular attractions for many years. You can follow a trail to explore amazing ice formations and scenery all year round. 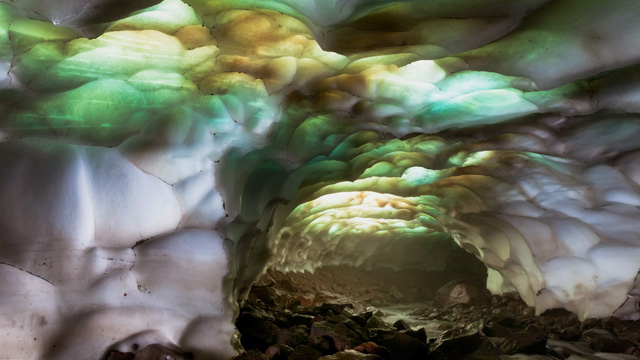 Another beautiful ice cave is on the Kamchatka Peninsula in Russia. Volcano activity is causing these ice cave walls to slowly melt, allowing light to shine through and providing amazing scenery.

Scotland is home to a beautiful sea cave located on the uninhabited island of Staffa. The tour takes a few hours to complete and is accessible by a unique and popular boat tour. (source)

This New Zealand cave is one of the most unique natural formations you can tour. The cave lights up, thanks to the native New Zealand glowworm. The tour takes about an hour to get through.

Cave of the Crystals, Mexico

The crystals found in this cave are giant, and you need to be properly equipped to get through the location. Tours are available when the conditions are right.

Weird Places: Mexico's Giant Crystal Cave
This video will be loaded from YouTube.com, a third party. If you click "Play", you accept their terms of service, and their use of cookies.

The Blue Grotto Sea cave is a beautiful blue naturally formed cave that attracts millions of visitors. You can take a relaxing boat tour through crystalline blue waters with silver reflections.

You can access this amazing cave all year round, following a walkway dedicated to tourists allowing them to take in the sites of this stunning natural art.