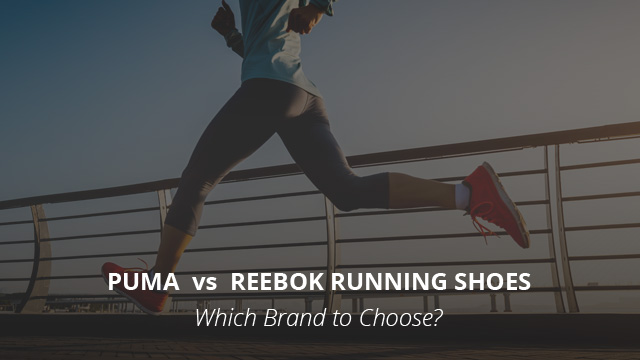 Puma and Reebok are world-famous sportswear brands, each with a history spanning several decades of ups and downs, leading them to become the brands we know today.

In our comparison, we look at the history of the two brands, their strengths and weaknesses, and some of the best products from each brand.

When it comes to settling on one brand over the other, we’ll show you why we strongly feel that one of the brands is better than the other. We’ll also let you know which brand is our favorite.

Puma has had a rich history since the 1900s and has grown tremendously to become the third-largest sportswear maker in the world after Nike and Adidas.

Puma and Adidas share a common history in their conception and growth. The brands were founded by the Dassler brothers, Rudolf Dassler and Adolf Dassler, after the two brothers split and began their own business ventures. 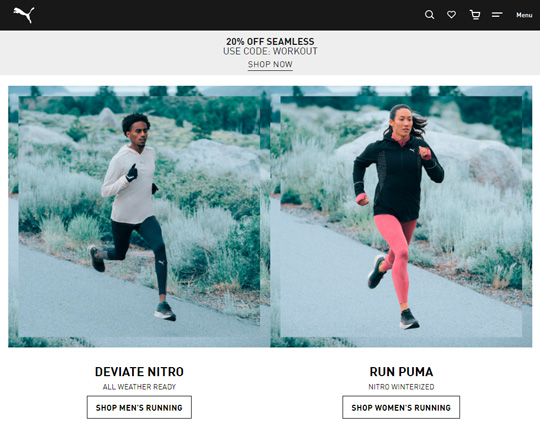 In the early 1900s, Adolf Dassler began making sports shoes in his mother’s laundry and was later joined by his brother Rudolf Dassler, upon which they founded the Dassler Brothers Shoe Company.

After working together for over two decades, the brothers broke away, each starting his own shoe-making company.

Ruda began in January 1948 and was renamed Puma in the same year. Both Adidas and Puma were headquartered in Herzogenaurach in Bavaria, Germany, where they are still headquartered to this day.

The two companies were major rivals, with each competing against the other to dominate Herzogenaurach and the sports world at large.

Puma has become the third-largest sportswear brand after Nike and Adidas. The company has approximately 14,300 employees and raked in 5.23 billion euros in 2020 sales.

Puma’s success history is largely premised on football boots, but they have also had great success in the production of running shoes.

Rudolf Dassler died in 1974, and his sons Gerd and Armin inherited the brand, with Armin taking over the company after a legal dispute.

In 2011, Puma became a European corporation under the name Puma SE.

Run Effortless with PUMA Nitro
This video will be loaded from YouTube.com, a third party. If you click "Play", you accept their terms of service, and their use of cookies.

Puma also supports environmental conservation and is dedicated to using recycled materials, such as recycled polyester, to reduce its environmental impact, especially since becoming a carbon-free company.

In the running shoe arena, Puma has come up with some unique technologies, such as the Vulcanization Production Technique in 1960 that bound the sole to the shaft of the foot for a better shoe grip.

In 1991, Puma rolled out Puma Disc technology in its running shoes. This technology brought in the world’s first-ever laceless sports shoe, featuring inbuilt wires for tightening the upper to fit around the foot perfectly.

Puma also made the world’s first foam-free midsole with its Cell Technology. Other notable Puma advancements include the Run Puma line of running shoes and the PumaGrip Outsole, a rubber for multi-surface traction.

The Development of Mobium - PUMA
This video will be loaded from YouTube.com, a third party. If you click "Play", you accept their terms of service, and their use of cookies.

Below are two favorite Puma running shoes we think you’ll love too. 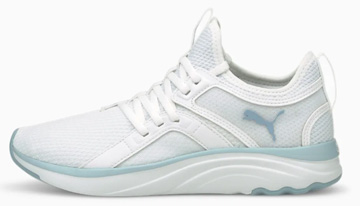 The shoe is available in different colors and various sizes between 5 and 11, providing you with many different options to satisfy individual preferences. 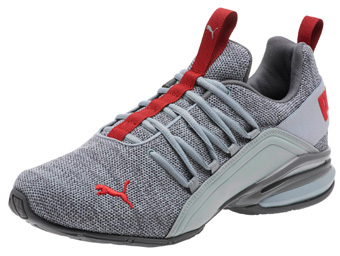 The Puma Men’s Axelion shoe features a rubber sole and a low-profile rubber outsole suitable for use on various indoor surfaces.

The shoe is available in various sizes and colors to choose from so you can select your perfect fit and color preference.

It’s important to check out some common questions people ask about Puma running shoes to make your decision-making easier.

Are Puma Running Shoes Worth the Money?

Puma running shoes are definitely worth the money. The shoes are made with athletes in mind to ensure you get safe, comfortable, lightweight, and efficient footwear.

Considering that even world-famous sportspeople like Usain Bolt break world records and win medals wearing new Puma running shoes, you can rest assured that the shoes live up to their promise of speed, responsiveness, and efficiency.

Where Are Puma Running Shoes Made?

Puma has over 220 suppliers worldwide who manufacture about 90 percent of Puma’s accessory products, footwear, and apparel.

Asia is the leading sourcing area for Puma, with China and Vietnam being the main supplier countries.

Puma also has suppliers in other countries such as Paraguay, Pakistan, Taiwan, South Africa, Thailand, Tunisia, Ukraine, the Philippines, and the US. (source)

Like Puma, Reebok is a world-renowned sportswear brand with its beginnings dating back to the late 1950s. Since then, the company has been dedicated to making running, walking, and jogging shoes.

Must read: Are Reebok Running Shoes Good? (My 5+ Years Experience) 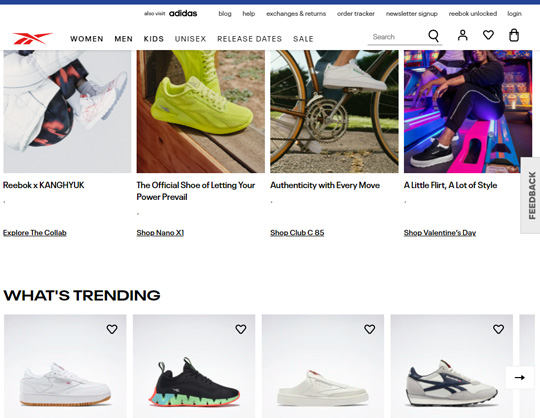 Reebok was founded in 1958 in Bolton, United Kingdom, by Joe and Jeff Foster, the grandsons of Joseph William Foster, who was famous for the “Running Pumps” sports shoes.

The name Reebok derives from the Gray Rhebok antelope, which is known for its running speed. The grandsons found the word in a South African dictionary a young Joe Foster had won in a sprint race years earlier.

The Paul Fireman purchase made the company an American fitness brand. Fireman was an established American businessman who had earlier introduced Reebok to the US as Reebok US Ltd.

In 2005, Adidas, the world’s second-largest sportswear brand, bought Reebok and became the new owner until the first quarter of 2022, when it will complete the sale of the company to Authentic Brands Group.

Reebok has struggled to stay afloat in the sportswear market because of reduced marketing efforts. However, it has remained a great innovator of running shoes over the years. 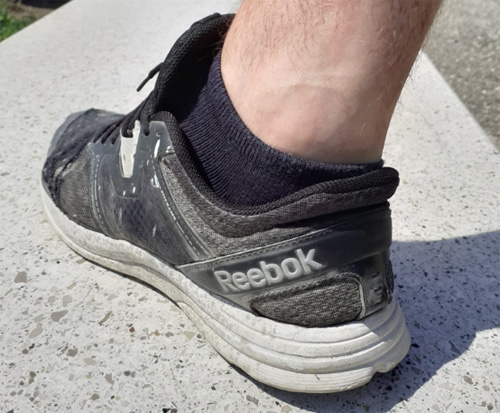 Like Puma and most other sports footwear companies, Reebok makes its shoes using both synthetic and natural materials such as leather, rubber, and polyester.

In 1989, Reebok released shoes with the Pump technology that became popular in basketball footwear circles.

The Pump technology by Reebok enhances stability and support since it features built-in inflatable chambers around the ankles and the whole foot that you can inflate or deflate to your comfort.

Reebok's First-Ever Plant Based Running Shoe
This video will be loaded from YouTube.com, a third party. If you click "Play", you accept their terms of service, and their use of cookies.

Be sure to check out the two Reebok pairs below that we have selected from Reebok’s wide variety of running shoes. 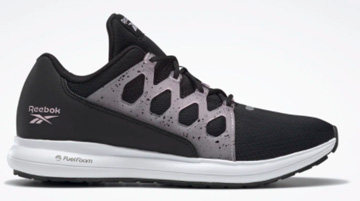 The Women’s Driftium Ride 2.0 running shoes are ideal for women looking for running shoes with superior comfort. They are lightweight enough to run comfortably across different terrains.

The following questions may help you solidify your choice of Puma vs Reebok running shoes. Be sure to compare this section with the one above for Puma shoes.

Are Reebok Running Shoes Worth the Money?

Reebok has been a dedicated maker of athletics footwear and running shoes that are ideal for athletes. This dedication over the years means that the company has only gotten better and that their running shoes are worth every penny you pay.

Where Are Reebok Running Shoes Made?

Most of Reebok’s products are made in Vietnam now after the company cut the China production line to reduce costs. Some products are also made in the US in Rhode Island and Michigan.

Right from the start, we agreed that it’s not easy deciding between the products of two high-quality brands. We also agreed that this decision is a bit easier when it comes to Puma vs Reebok running shoes.

Our choice of the better brand between the two is Reebok. While each company has had its fair share of ups and downs, Reebok has remained fairly true to its cause of producing high-quality running shoes from the start and has only gotten better and better.

On the other hand, Puma‘s most significant domination from the start has been in the production of football shoes. Since its beginning in 1948, the company has focused on football (soccer) shoes and we feel it hasn’t yet made running shoes its primary focus.

Read next:
The 8 Types of Running Shoes for Serious Runners
Our 3 Favorite Japanese Running Shoe Brands