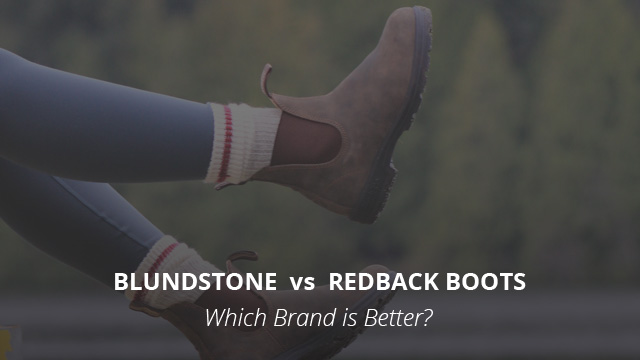 Billions of footwear are produced globally every year. Many brands create high-quality and unique options, making it difficult to decide what to buy.

It is even more challenging to choose between two well-established brands like Blundstone and Redback. The two companies focus on what anyone with a solid appreciation for boots is looking for: durability, comfort, and waterproofing.

Still, everyone’s preferences are different, and you’ll always find a reason or two to choose one over the other.

In this article, we run a side-by-side comparison of the two brands that’ll guide you in making an informed decision if you feel caught between these two footwear manufacturing giants.

The Blundstone boots – famously known as Blunnies in their originating country of Australia – have a rich history spanning from the 1870s, when it was founded.

To date, the Blundstone company has remained one of the lead global manufacturers of workboots.

The boots are designed to withstand harsh environmental conditions while being easy on the feet over long working hours. 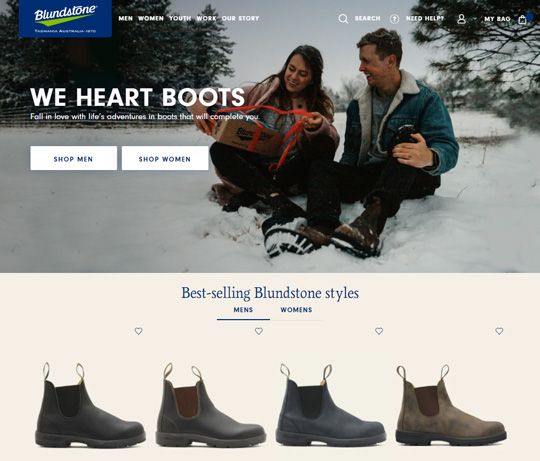 The history of Blundstone starts with two settlers: John and Eliza Blundstone. The couple emigrated from Derbyshire, England to Hobart, Tasmania in Australia in the 1850s.

John Blundstone, who worked as a coachbuilder for more than a decade after his arrival in Australia, started importing footwear from England in 1870. He later began manufacturing boots on Liverpool Street, Hobart, located in Tasmania, Australia.

He was later joined by his eldest son, Sylvanus Blundstone, in 1892 to form J. Blundstone and Son, where they manufactured boots in two parallel outlets on Collins Street.

They later built a two-story factory on Campbell Street, where they moved their operations from Collins Street. William, John’s younger son, ran the company’s importation wing as W.H Blundstone & Co.

The Canes sold the company to James Cuthbertson’s grandsons, James and Thomas, in 1932. Cuthbertson initially owned a shoemaking and importing business in Hobart. The Cuthbertson brothers merged the two companies and retained the name Blundstone.

In 2007, Blundstone Australia announced it was moving its operations overseas due to increased costs in Australia.

However, Blundstone promised to produce at least 200,000 pairs of footwear in Hobart, Tasmania every year, even though its major manufacturing activities were moving overseas.

Today, Blundstone products are manufactured globally but with headquarters still in Tasmania.

Blundstone 150 Years
This video will be loaded from YouTube.com, a third party. If you click "Play", you accept their terms of service, and their use of cookies.

Blundstone footwear features advanced technologies carefully engineered to offer comfort and safety solutions. The boots feature a steel toe cap, the best solution available for protecting against injury to the feet, including cuts. 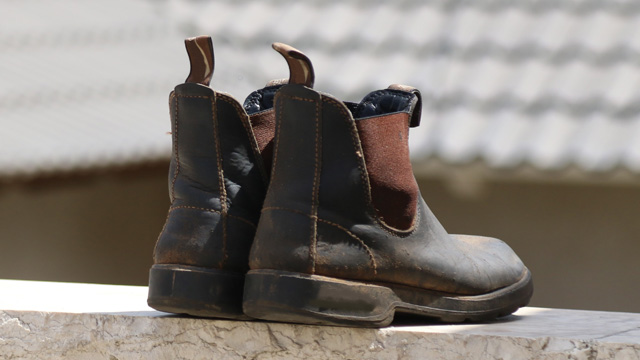 A pair of Blundstone boots

Many work boots have an outsole heat resistance of 284°F or greater, depending on the style. The boots will withstand many harsh industrial applications, including chemicals. (source)

The latest material design construction is soft and flexible but also tough and resistant to wear. The XRD technology is a thin, lightweight, breathable material designed for comfort and maximum shock absorption.

The soling is oil- and acid-resistant, with penetration resistance for sharp objects.

The outsole meets slip-resistance standards of AS 2210.3:2019 and features different tread patterns and tough soling material.

Blundstone boots come in many different sizes, styles, and price ranges. Here are our two top picks for you to check out. 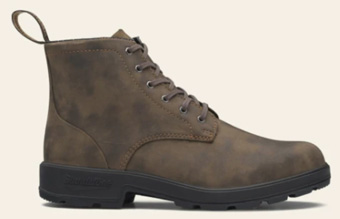 The Men’s #1930 Originals Lace Up Boot is ideal for activities like motorcycle riding. The boot is lightweight and easy to maintain with a simple leather polish, cream, or spray application. 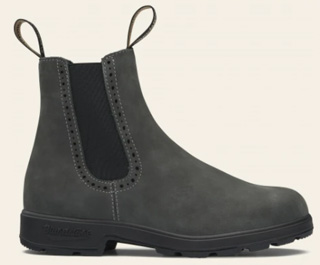 The Women’s #1630 High Top Boots are stylish and comfortable, with a touch of flair suited for all walks of life. These are perfect boots for the office, the farm, or even a weekend out with friends.

Blundstone has different manufacturing arms globally. The company has also undergone multiple ownership transfers over the years. Below are responses to common questions people ask about Blundstone operations and its product.

Are Blundstone Boots Worth the Money?

Durability and comfort are the first things that come to mind when you think of quality boots. Blundstone offers all of that and beyond.

Whether you’re looking for men’s or women’s Blundstone boots, there’s a wide variety of stylish options to choose from. And Blunnies are incredibly versatile.

These are the great-for-all-weather boots you don’t want missing from your closet. We think Blundstone boots are indeed worth every dime you’ll spend on them.

Where Are Blundstone Boots Made?

Blundstone is still headquartered in Hobart, Tasmania, Australia, where some manufacturing still occurs. However, the majority of Blundstone products have been made overseas since 2007. These manufacturing locations include Vietnam, Mexico, Thailand, India, and China. (source)

Redback is a household name in the footwear manufacturing industry in Australia. The company is famed for its comfortable, lightweight work boots. Redback has been the primary supplier of footwear for the Australian Defense Force since 2000.

The boots are designed to withstand long hours of strenuous activities in intensive construction and manufacturing industries.

Redback is a legendary Australian footwear manufacturer that has been around for several decades. The company has its headquarters in Alexandria, New South Wales, Australia and it is owned by the Cloros family.

Redback has supplied the Australian Defence Forces with its Redback Terra Combat boots since the year 2000. The company took over from the Vietnam War-era General Purpose combat boots after a limited number of tests in 1999.

Unfortunately, despite its general outstanding performance compared to other brands, Redback boots still had some flaws.

The soles feature three-layer counter-design heels and are molded using TPU compression technology, making them resistant to many different chemicals.

The mid-sole is a two-component urethane air cushion with millions of tiny air bubbles. This makes the boots highly shock-absorbent while enhancing the overall lightweight boot design.

The sole has a multi-directional lug design for increased traction on different surfaces. It’s very flexible and resistant to cold weather, cracking, and splitting.

The footbed insulation offers thermal comfort and better foot shape. The pull-on loops make them easy to slip on and off on the go with less struggle.

Now let’s take a look at the below Redback boots that we thought might interest you. 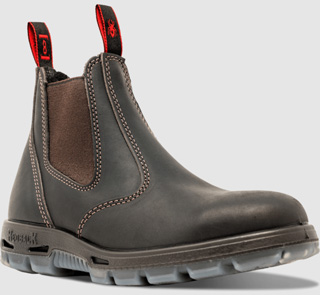 The Bonsall Men’s and Women’s Boot is a universal lightweight work boot weighing 38 ounces and reaching 6 inches in height. The boot features an upper full-grain leather and a thermoplastic polyurethane outsole.

The boot is electrical hazard (E.H.) certified with excellent traction against oil and acid.

Check out the answers below for these common questions about Redback boots.

Are Redback Boots Worth the Money?

The boots feature high TPU compression technology that makes them highly resistant to harsh conditions, including corrosive chemicals such as acid. Coupled with air cushion midsole and upper full-grain leather, Redback boots are worth the money in our opinion.

Where Are Redback Boots Made?

Redback boots originated with the Cloros family in Australia. The footwear is proudly 100% Australian-made. (source) 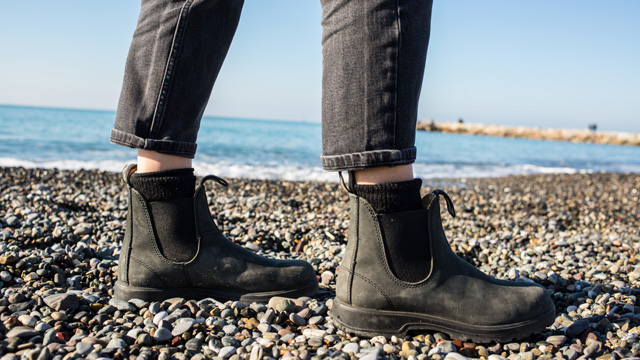 A pair of Blundstone Chelsea boots

It’s never easy to choose between two brands with similar qualities that make them suitable for their desired applications.

Blundstone and Redback boots are high-quality Australian boot brands that are made from quality leather material, are water-resistant, and offer return policies.

However, key differences, like the material used, waterproof level, comfort levels, and design, set them apart.

As for lightness, both brands are lightweight and comfortable for work and everyday wear. Also, both brands use modern construction technologies. Blundstone offers more design options that cover many activities, not just work.

One important factor that you might want to consider is the fact that Redback boots are 100% Australian-made. This may be a deciding factor for many people who prefer brands that manufacture their products locally.

In our opinion, both brands are great options suited for harsh work environments and for casual wear. In the end, we’d choose Redback for durable work boots and Blundstone for lifestyle footwear as we think Blundstone offers more styles to match different types of outfits.